“Is the tech selloff bullish?” Am I seriously asking such a question? How dumb must I be? I don’t know. I guess you’ll just have to read to find out!

It’s been a month since my last blog post, and I thought with that ugly price action on the Nasdaq we saw this week, that it might be worth updating my thoughts. This price action is especially precarious given the environment in which we are operating aka the plandemic which just so happens to coincide with the most divisive election of our lifetimes (yes boomers included). With that said, I’m actually quite optimistic for certain parts of the equity market over the next few weeks. But before I can get to my bull case, I feel the need to address the bear case.

Starting with price action. Yes, as a bull I saw the price action in the Nasdaq this week, same as you. It’s not great. If I was bearish, I’d be pretty pumped with that n of 1.

The Nasdaq 100 rallied more than 2% intraday to set an all-time high, then reversed to close down by more than 1%.

It's done that twice. Today was one.

This price action is especially concerning when you consider just how consensus “long tech” has become. According to BoA it was a record in terms of “consensus”. The consensus has never been so consensed (nautical term)!

Also interesting that tech stocks, being the '#NASDAQ', '#FAANG + BAT' or just 'US tech' have been among the most-crowded trades for years now. pic.twitter.com/qLAFPSoFOX

I’m not gonna stand here and tell you to buy SHOP at 70x sales or any of the FANG stocks with w/e their current multiples are. I couldn’t care less to be quite honest. Everyone keeps pointing to the year 2000 when the tech bubble burst and took the real economy down with it, I don’t see that being the case at all. To me, it seems, that once again, the bears are just fishing for an excuse to be bearish. That’s not to say once again that there aren’t real problems in the ECONOMY.

IN NOW JUST 10 DAYS, MILLIONS OF PEOPLE'S LIVES ARE SCHEDULED TO BE THROWN INTO DISARRAY

In today's @markets newsletter, I wrote about the very straightforward stakes of what's about to happen to the US economy https://t.co/3lrMAtznd7 pic.twitter.com/ypHtnBxts0

We got real problems in the US economy, which are all compounded by the lack of clarity surrounding the virus and most importantly our response to it. And I think the bears may be guilty of conflating the two. For some reason, they still focus on case counts versus deaths.

But if you actually look at the deaths, the US isn’t worse than any other western nation, and this is including the disastrous job done by Cuomo in NY. Who would known that all you had to do to slow deaths was to stop deliberately infecting the elderly! 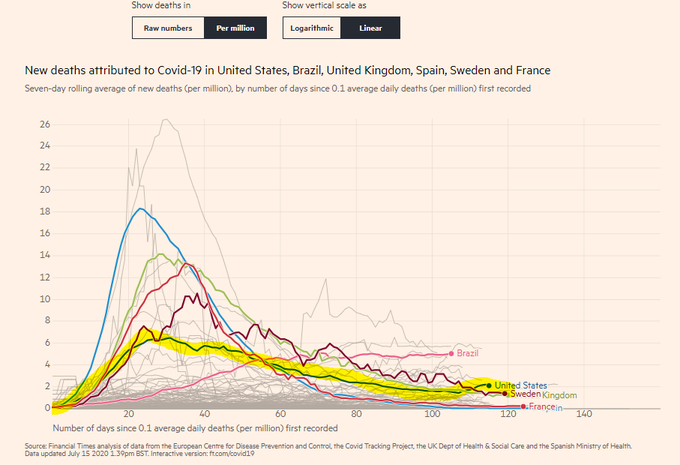 Remember the disaster that was supposed to be Sweden? Deaths in Sweden have now fallen below the 5 year average. The horror!

I’m not a virologist, these are just simple statistics. The virus appears to run through a concentrated population in a matter of weeks IRREGARDLESS of the lock-downs. Sweden’s cases peaked after just 5 weeks, which roughly matches NY’s 6 weeks.

New York did NOT crush COVID-19. The lock downs were completely ineffective, but the virus went away after a couple of months, which suggests that the rising cases we’re seeing in places like Texas and Arizona and Florida are going to peak in the next weeks if they haven’t already.

ICYMI: The Worst Is Over For Arizona's COVID Breakout, Goldman Findshttps://t.co/7wmN5LqJm6

Furthermore, it’s important to note the role Mexico has had in the rising case loads in border states. It’s likely that the border states and Mexico have been feeding each other’s outbreaks.

it's clear the outbreak in mexico has had an effect on the US border states.

but it also is starting to look like mexico has peaked and is on the back side of the curve now.

this may ease pressure in TX, AZ, CA, NM. pic.twitter.com/8rEqp5TM5N

Now I understand how highly controversial this all is. And yes I’m not a virologist or a social modeler or w/e fancy term people apply to their professions. I’m just a millennial who dropped out grad school because he is a lazy piece of shit. This is all to say, feel free to ignore my opinion.

And if the virus has peaked in these states, then you might expect the work from home stocks to begin to under-perform the market.

Increases in COVID-19 cases are positively correlated with Nasdaq outperformance — this is a bet on a virtualized future.

If this was a true “V-Shaped” economic recovery, cyclicals would be leading the way.

Fed action has not raised all tides — it is far more nuanced.

Notice Zoom peaked on Monday and Netflix missed earnings today. It’s kind of hilarious how excited the bears are over the fact that not as many people are spending their days indoors streaming tv and movies as the market expected.

$NFLX Netflix earnings just told us that earnings are 100% priced in, even the best pandemic growth stock couldn’t move the needle on earnings.
The market just sent us a huge message about earnings season.

I don’t think this is a coincidence, nor do I think it is outright bearish. I think the market is telling us something about the economy. I think the virus cases have peaked and we’re about to see a rotation from these high flying growth stocks to small caps and value stocks. Whether or not this rotation is durable or lasts longer than a couple of weeks or months is beyond my forecasting capabilities (I’m only human). It’s certainly an interesting coincidence that the Russell 2000 has outperformed since Trump donned a mask in public for the first time this week.

Which brings me to my next point. Masks. Finally the US is adopting a nationwide mask policy, if only piece wise. Corporations like Walmart are now requiring customers to wear masks.

Whether or not you think masks work, they give people confidence to return to their normal lives. When you combine a confidence inspiring mask policy with falling cases in the troublesome states you would expect to see a return of optimism to these unloved small cap and value stocks. Furthermore, rates could rise on the back of this optimism which could further dent these high flying tech stocks and drive a rotation into small caps.

Lastly, let’s not forget the role of the Fed, which as an institution has never been more dovish. The US government has also been incredibly supportive and will continue to be so. The potential energy in this system if unleashed is absolutely enormous. Any signs of optimism with regards to the virus and the economy will be rewarded.

"As we move to the next phase of monetary policy, we will be guided not only by the exigencies of the COVID crisis, but also by our evolving understanding of the key longer-run features of the economy, so as to avoid the premature withdrawal of necessary support." https://t.co/kGixSZ4FHf

In summary, the virus is peaking in the most troublesome US states, the Fed is super dovish, the confidence inspiring mask policy is here, all of which should translate into small caps outperforming the high flying growth stocks.

DISCLAIMER: This blog is the diary of a thirty something millennial who has never stepped foot inside a wall street bank. He has not taken an economic or business course since high school (which he is immensely proud of) and has been long gold since 2012 (which he is not so proud of). In short his opinions and experiences make him uniquely unqualified to give advice. This blog post is NOT advice to buy or sell securities. He may have positions in the aforementioned trades/securities. He may change his opinion the instant the post is published. In short, this blog post is pure fiction based loosely on the reality of the ever shifting narrative of the markets. These posts are meant for enjoyment and self reflection and nothing else. So ENJOY and REFLECT!