Between the PBoC spending reserves defending it’s currency, sovereign wealth funds liquidating assets to pay expenses, and the Fed tightening as the economy slows down, the world is undergoing a massive liquidity drain. The carry trades that levered up the world are being unwound which is causing volatility in the equity and more importantly the currency markets.

The three most imbalanced carry trades are dollar-EM, euro-dollar, and yen-dollar. When these carry trades unwind, liquidity is pulled from one market to the other.

As we’ve seen in this US stock market sell off, the Yen has strengthened against the dollar. This is a direct effect of Yen-dollar carry trade unwinding. The same effect has been observed in the Euro. The stronger currencies in a deflationary world crush their respective economies and all of this is occurring in spite of both economies undergoing a massive quantitative easing program!

Normally this is the part here Scooby utters “Ruh-oh, Shaggy!” but it gets worse! 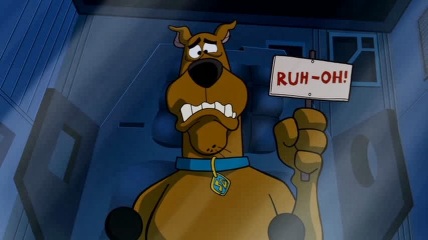 Because we live in a relative world, and if the ECB and BoJ unleash further easing on the world, then they will strengthen the dollar.

A strong dollar, as I’ve explained ad nauseam but will do again because it is so essential to this narrative, drains liquidity from the global economy through a NUMBER of mechanisms.

Thus as we can see, the dollar at its current level is very harmful to the global economy and any further strengthening would accelerate the global liquidity drain. Like I said in the beginning, the liquidity drain is unwinding carry trades which strengthens the Yen and the Euro! Now this is the part where Shaggy goes Zoinks! 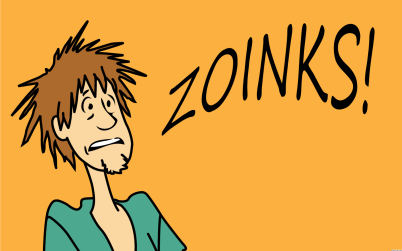 In short, any Yen and Euro devaluation is incredibly short lived as the stronger dollar ends up strengthening the Yen and Euro in the end!

Meanwhile, as these three dance around like idiots over a hot bed of coals, China is hovering above with the sword of Damocles about to strike. China’s devaluation is a ticking time bomb for the world. And with an estimated $180B capital outflows in January, China has until June before starts to dip into it’s precious silk road fund.

Which brings me to the title of today’s post. 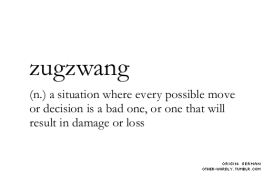 The ECB, BoJ, and the PBoC cannot move without destabilizing the global economy even further. At the same time,  their respective economies are deteriorating in front of their noses. Other people will say, that they are “out of bullets”. Whatever your expression is, the BoJ and the ECB and for that matter the PBoC are all stuck in Zugzwang. This is why the BoJ went negative rather than printing more money. It was a small but meaningful gesture that the BoJ is acknowledging the Yen’s recent strength cannot be tolerated. But they can’t really do much more than that at this point. Any increased strength in the dollar will come back to hit them in the face with a global sell off and the unwinding of carry trades.

The implications for central banker Zugzwang cannot be understated at this time. Without effective tools at combating deflation and market instability, the world headed into another crisis this time without a wheel to steer the ship. It’s important to remember that most of the world leaders who have charted the course of the world economy since the last crisis are still in power. Which leads me to believe that the world is in for a massive amount of regime change. Safety is the name of the game here. Buy it before it becomes to expensive to do so.

One thought on “Welcome To Zugzwang”