“First they came for the Socialists, and I did not speak out—
Because I was not a Socialist.

Then they came for the Jews, and I did not speak out—
Because I was not a Jew.

Then they came for me—and there was no one left to speak for me.”

The US stock market, like the man in Pastor Martin Niemöller’s poem has ignored the continued absence of all the drivers which have pushed it higher. One by one the Trump rally dominos have continued to fall.

First the market turned for China.

Given my belief that Chinese economic activity is the largest driver of the global reflation trade, it is important to note that some of the indicators coming out of China turned long before Trump was elected. The PBOC began tightening in August of 2016. Shortly after, M1 Growth YoY turned down.

The impact of this tightening bias from China’s central bank has continued to impact bond yields which have continue to hit multi-year highs.

Chart: Bond yields in China are on the rise again as the central bank shift into a tightening bias – pic.twitter.com/fTijVE68DP

Then the market turned for US treasuries.

Bond positioning in the US also equally tiled towards an all in bet on reflation by the market. Hmmm…. pic.twitter.com/2217NPnGKD

And yet the US 10 year peaked in mid-December. 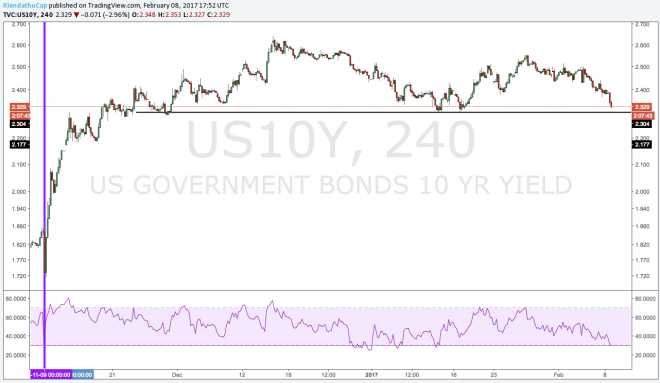 Meanwhile the 30 year never broke out of its range to begin with.

Then the market turned for gold.

But who cares about the yellow metal? Investor fears are shifting from accelerating growth to stagflation, or are worried of the implications of rising populism around the world, particularly in the EU.

#Gold since the election. Make of this what you will… pic.twitter.com/2NFGlDrF7l

Soon the market will turn for stocks, and there will be no one left to hold them up…

EXCEPT the euphoric levels of sentiment and positioning.

This will end well

New record this week in speculative net short positions against the VIX: pic.twitter.com/P7IwhW4YIx

The only thing left holding up the US stock market at the moment is the narrative, which I think is in danger of a rather dramatic adjustment.

Let me be clear, I am not calling for the end of the US equity bull market… yet. Simply that I believe the odds of a correction in the US stock market to be quite high over the next two to three months. I’m not loading up the boat this instant, but I am now keenly looking to add to a short position over the next month.

Disclosure: The Klendathu Capitalist is short IWM. This blog post is not advice to buy or sell securities. The author is simply informing you of his thought process in hopes that both the author and the reader will learn from his mistakes.