As the sea based terminus of China’s One Belt One Road (OBOR) program, Greece’s role as a gateway to Europe is greatly undervalued. There are good reasons for that undervaluation, or at least there were, whether it was the depressed European economy, the debt crisis, crippling austerity, global trade slowdown, or the business unfriendly Greek government. While the Greek government may not change anytime soon, everything else either has or is on its way to turning from a negative into a positive. 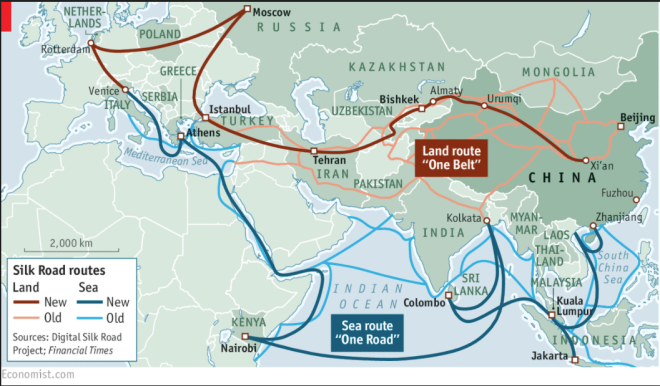 Most importantly, a gateway is only as good as the two locations it connects. With the global economy undergoing a major slow down these past 3 years, and Europe stuck in a series of rolling crises for the better part of a decade, the value of Greece as a gateway was quite small. But that appears to be changing. Global growth is on the rebound (at least temporarily) and more importantly the EU appears to be growing for the first time since 2011.

You can make case for that growth has peaked and sentiment towards Europe is extreme, but if you had any doubt that there might be a recovery going on in Europe, look at the defeat of the populist and Euro-skeptic parties.

Italy held local elections in Genoa, Palermo, Parma etc. Exit polls show 5 Star Movement does not make 2nd round in any of the major cities.

These political parties which feed off anger, disappointment, and despair have been pushed into the background. If there ever was a sign of improvement in the region, it would be exactly this.

It does. Pulse of Europe, Macron's landslide when explicitly standing with the EU flag… The EU identity is there. https://t.co/WnASHC3MqZ

And with the Euroskeptics out of the way, the EU can push towards closer unity.

The French led by Macron are pushing for Greece to be brought back into the fold. Macron has and continues to be a staunch supporter of Greece. From The Telegraph (my emphasis in bold):

“The confrontation at the height of the 2015 Greek debt crisis is revealed in “Adults in the Room”, the new memoir of Yanis Varoufakis, the controversial former Greek finance minister who tried – but failed – to win debt relief for Greece…

On June 28 2015, with Greece’s bank on the cusp of closure, Mr Varoufakis writes that he received a text from Mr Macron offering to broker a last-minute deal to win debt-relief for Greece in return for structural reforms.

“I do not want my generation to be the one responsible for Greece exiting Europe,” Mr Macron wrote, offering to broker a meeting between the Greek prime minister Alexis Tsipras and President Francois Hollande.

The attempt, however, was blocked by Germany whose ultra-hawkish finance minister Wolfgang Schaueble was suggesting that Greece take a ‘holiday’ from membership of the euro.””

Although Schaueble shot down the deal in 2015, a lot has changed since then.

On top of Schaeuble’s shift towards a more unified EU, Greece posted a 2016 budget surplus of 0.7% versus the 0.8% of Germany. This is in stark contrast to the 15% budget deficit Greece ran in 2009. And more importantly if Germany continues to push a hardline, it and the EU could cede even more of their influence over Greece to China.

“Cooperation in infrastructure, energy and telecommunications should be “deep and solid”, Xi added, without giving details.

Tsipras is in Beijing to attend a summit to promote Xi’s vision of expanding links between Asia, Africa and Europe underpinned by billions of dollars in infrastructure investment called the Belt and Road initiative.

Greek infrastructure development group Copelouzos has signed a deal with China’s Shenhua Group to cooperate in green energy projects and the upgrade of power plants in Greece and other countries, the Greek company said on Friday.”

China also is a major stake holder in Greek ports. From Al Jazeera:

“Chinese nationals have taken almost half of the investment licenses the country has granted to foreign investors over the past four years through its “Golden Visa Program.”

But it’s not just investment, China is going to start sending vast amounts of tourists to Greece after it launches the first direct flight between the two countries in September of this year. Over the next two years that Chinese tourists to Greece is expected to climb from 150,000 per annum to over 1,000,000 according to Chinese estimates.

Given that Greece’s tourism industry contributes 20% to GDP, this infusion of cash rich Chinese tourists should be a shot of adrenaline into Greece’s capital starved economy, which will go a long way to easing negotiations between Greece and its creditors. But it’s worth noting that China isn’t the only non-EU country investing in Greece. Russia has taken the 2nd most real estate investment licenses in the last year. From Jing Daily:

“By the end of January 2017, the Greek government issued a total of 1,573 real estate investment licenses to foreigners, out of which Chinese buyers took 664 seats, followed by 348 from Russia, 77 from Egypt, 73 from Lebanon and 67 from Ukraine, according to the data published by the Ministry of Economy. (The data is based on the number of real estate permits they have released.)”

Once again, this poses a huge problem for the EU who is beholden to Russia’s natural gas and oil exports. From MacroPolis (my emphasis in bold):

“To this end, the EC considers a route via the Mediterranean – the Southern Gas Corridor – a crucial investment, stating that “the Mediterranean area can act as a key source and route for supplying gas to the EU.”

This is where Greece comes in. The first major achievement was the signing of the Trans Adriatic Pipeline (TAP). This project sees some 550 km of the pipeline passing through Greece which will link to with the Trans-Anatolian Natural Gas Pipeline and the existing South Caucasus Pipeline (SCP) connecting Turkey to the Azerbaijani gas fields in the Caspian Sea via Georgia.

Together, the three pipelines will form the Southern Gas Corridor, seen as essential for Europe and to diversify away from its current dependency on Russia for gas.“

In essence, Greece finds itself at the center of a tug of war between the east and the west. But this is not a zero sum game for Greece. Both sides need Greece to do well for their respective side to thrive. China needs Greece for the success of its OBOR program. The EU needs Greece to form a stronger Union, for it’s role as a buffer from migrants, and as a alternative energy route to end Russia’s gas monopoly among many other things.

It’s a win win situation for Greece, a country who has suffered for five years under harsh austerity without access to the capital markets. The economy is a coiled spring waiting to explode. With China and the EU vying for the country’s undervalued assets its a matter of time before the energy in that spring is released. 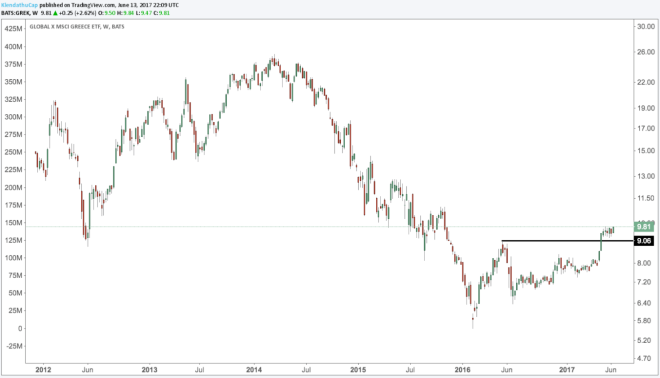 Disclosure: The author is long GREK.

DISCLAIMER: This blog is the diary of a twenty something millennial who has never stepped foot inside a wall street bank. He has not taken an economic or business course since high school (which he is immensely proud of) and has been long gold since 2012 (which he is not so proud of). In short his opinions and experiences make him uniquely unqualified to give advice. This blog post is NOT advice to buy or sell securities. He may have positions in the aforementioned trades/securities. He may change his opinion the instant the post is published. In short, what follows is pure fiction based loosely in the reality of the ever shifting narrative of the markets. These posts are meant for enjoyment and self reflection and nothing else. So ENJOY and REFLECT!

2 thoughts on “Greece: The Gateway To Mispricetopia”