Ever since China arrived on the global stage at the turn of the 20th century, front running the rising juggernaut has been an incredibly lucrative strategy. In the early 2000’s this meant buying exposure to common elements like copper and iron ore, but more recently emerging technologies have shifted the focus to more niche and illiquid elements like cobalt and graphite (carbon) making the trade harder to put on. The next link in this chain is Vanadium, which is fast becoming a key component to many technologies and industries.

Vanadium is used to make steel and aluminum stronger while reducing the weight. Lighter and stronger metal alloys are increasingly important in our modern society where we strive for lighter more fuel efficient vehicles. From WSJ:

“By 2025, the amount of lightweight, high-strength steel in a car or light truck in North America is projected to rise to an average 483 pounds, 76% above the 2015 average, according to industry consultancy Ducker Worldwide.”

“Aluminum content in cars and light trucks in North America is expected to reach an average of 520 pounds in 2025, a 31% increase from 2015, according to Ducker Worldwide. More than two-thirds of closure components, such as hoods and trunk lids, on light vehicles are expected to be aluminum by 2020, double from 2016.”

More recently, Vanadium has found its way into the energy storage business. Vanadium redox batteries may not have the same energy density as lithium ion batteries, but they make up for it in terms of reliability, durability and robustness. As renewables create more demand for grid storage we should see yet another source of demand for vanadium. Here’s a link to cool visualization for all the uses of vanadium.

All else being equal before I even take China into account, there is a very bullish backdrop for vanadium demand. Vanadium’s global annual inventory change is shown in the chart below. 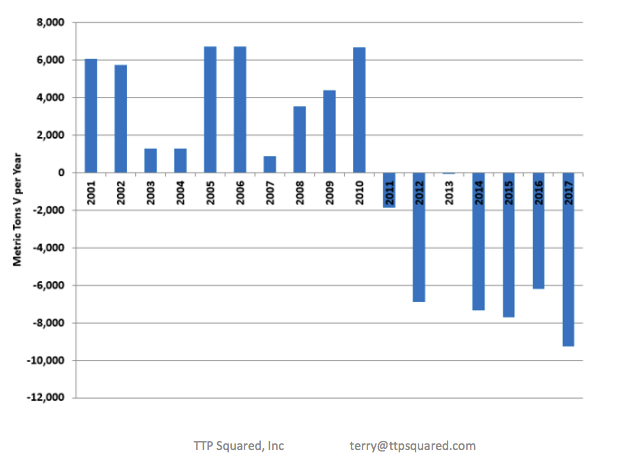 As for supply, the vast majority of vanadium comes from a byproduct of iron ore mining, which like every other commodity industry in the past 6 years has undergone heavy consolidation. Russell Clark of Horseman Capital wisely notes, capex from the four largest iron ore miners has fallen off a cliff. 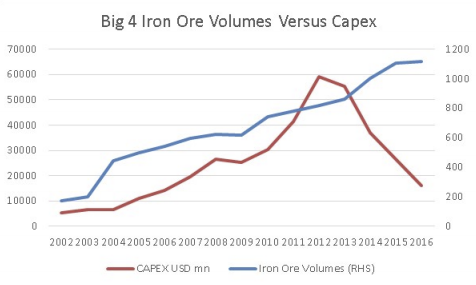 As part of China’s movement to deleverage parts of its economy and reduce environmental damage, potentially 1/3rd of iron ore mining licences in China will be revoked. This policy also extends to some pure vanadium mines that will be forced to shutter as well. But that’s not all, because China recently banned the import of low grade vanadium scrap metal reducing vanadium supplies further.

At the same time, China is moving up the value chain and will need to create high quality products that are worth of the “Made in China” and OBOR brand names. So this summer, China announced a new policy that raised the standard tensile strength of steel rebar from 335MPa to 600MPa, which could boost China’s demand for Vanadium by 30%, bringing it more in line with western levels. 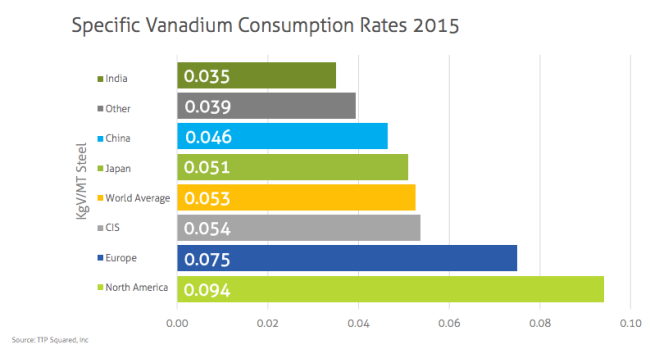 Note India at the low end of the consumption spectrum is planning a massive infrastructure overhaul of its own country. Obviously roads aren’t made of steel, but the point is clear, India is serious about upgrading its poor infrastructure.

India this week announced it will build enough roads in the next 5 yr to circle the entire Earth twice. 84,000 KM's. #India #Sensex

Also worth noting the last time China upped its vanadium demand through similar policy was in 2005. 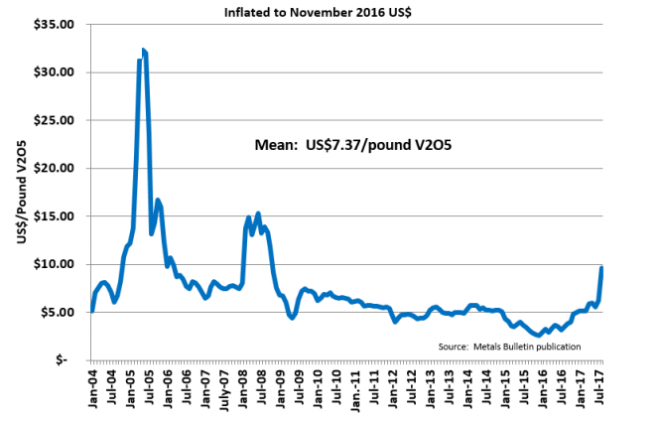 To quickly sum up, supply of vanadium is falling or stagnant. Demand is seeing notable increases from a wide range of sources. And the two world’s largest countries by population are set to supercharge these imbalances through new policies. Unless Earth is about to be hit by a bug meteor full of vanadium it seems to me that prices have only one direction to go.

DISCLAIMER: This blog is the diary of a twenty something millennial who has never stepped foot inside a wall street bank. He has not taken an economic or business course since high school (which he is immensely proud of) and has been long gold since 2012 (which he is not so proud of). In short his opinions and experiences make him uniquely unqualified to give advice. This blog post is NOT advice to buy or sell securities. He may have positions in the aforementioned trades/securities. He may change his opinion the instant the post is published. In short, this blog post is pure fiction based loosely in the reality of the ever shifting narrative of the markets. These posts are meant for enjoyment and self reflection and nothing else. So ENJOY and REFLECT!

2 thoughts on “Vanadium: The Next Commodity You’ll Pretend To Know Everything About”