“Hubris is one of the great renewable resources. ~ P.J. O’Rourke”

A wise observer (@inner_scorecard) of the markets remarked to me last year, that only the bears seem to suffer when their hubris gets the better of them. And I’m not just talking about Tesla, but the broader equity markets as well. Bulls can act like total buffoons and the market will never punish them. Bears on the other hand get spanked. Please note the date of the following tweet.

Among other things, @Inner_scorecard has coined the term TBAW or Tesla Bearish Always Wrong to mark a person who was bearish on the car company no matter the share price. While a TBAW may get the fundamental story correct he or she will miss the obvious things like the absurdly tight share structure, cult like following, unethical CEO willing to do w/e it takes to burn them, and regulators who have turned a blind eye (#FundingSecured).

To be clear, I’m not denigrating the TBAWs. Some of them have done an incredible job uncovering the extent of Tesla’s and Elon’s fraud. But it is important to recognize how terrible they are at trading this particular stock. I was and still consider myself one of these people. I was short the car company all the way into the 2019 Q3 earnings call and was summarily blown out of my position once and for all… at least until I saw the price continue to rise to its historic heights last week.

Guys, I was joking. https://t.co/peCWyKxNsx

On that historic day, $TSLA became the highest valued US auto OEM of all time. The company’s market cap soared beyond that of GM and F combined, all while selling less than 1/20th the cars and losing over $600mm over the past 12 months. Now, as anyone will tell you, valuation is not a catalyst for shorting. And I agree. This post is not about valuation, it is about sentiment.

Just ran into a neighbor in the mail room. The sort who we nod and say pleasantries to each other when we see each other. He walks past me then stops, turns and asks, "do you think TSLA is a buy here?"

I wish I was joking.

This post is about cataloging and documenting a potential peak in euphoria for the car company. It is about me wondering if maybe, just maybe hubris is going to finally cut both ways.

Whoa … the stock is so high lol

Within a few hours, Elon was back to tweeting about his car company’s share price. Note Tesla is trading almost $60 higher since these tweets.

Elon’s hubris aside (still trying to block out that China dance), what do the other shareholders think? 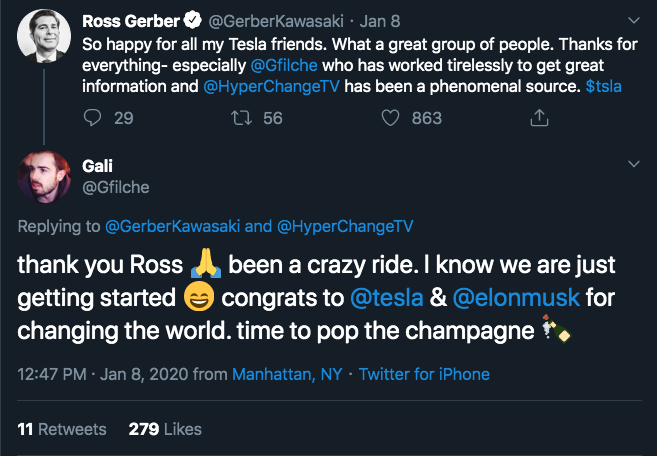 Tesla short sellers are dead. Model Y line going up in China. China is going nuts for Tesla. This is amazing. Hahahahhahahaha great job @elonmusk – he also landed another rocket on a ship tonight. Time for bed. $tsla https://t.co/2GgJSzoV0c

Now in and of itself this kind of celebration from the tesla bulls is meaningless. The Tesla bulls worship the ground on which Elon walks, and will cheer anything and everything he does.

To me, the signs that are much more significant are people who were once skeptics, doubters and shorts who have either given up or turned outright bullish on Elon Musk and Tesla. Perhaps no one exemplifies this better than Jim Cramer. Here’s a chart from FusionPointCapital:

Whitney Tilson was quite bearish on Tesla earlier in the year, and for a time he looked prescient. Note the timing of this report:

In December, Mr. Tilson put out a new note:

Perhaps an even stronger contra can be found in former Vice Chairman of GM, Bob Lutz, who has long been critical of both Elon Musk and Tesla. Once again, note the date.

And on January 8th this is what Mr. Lutz had to say about Elon and Tesla:

“The encouraging thing to me about tesla is from Elon there’s les talk, less bluster, less here’s how I’m going to do in six months and it seems like he has done what any other CEO and founder would do he is focusing on the business and focusing on the product and focusing on cost control so Tesla is finally being run like a normal business.”

More signs of sentiment can be seen in a recent CNBC guest.

What was @elonmusk like as a kid? We'll ask his mother @MayeMusk, coming up next! pic.twitter.com/JH0opqwTFk

News agencies have been quick to point out that Tesla only has 14% further to go before Elon receives the first milestone in his unique pay package. 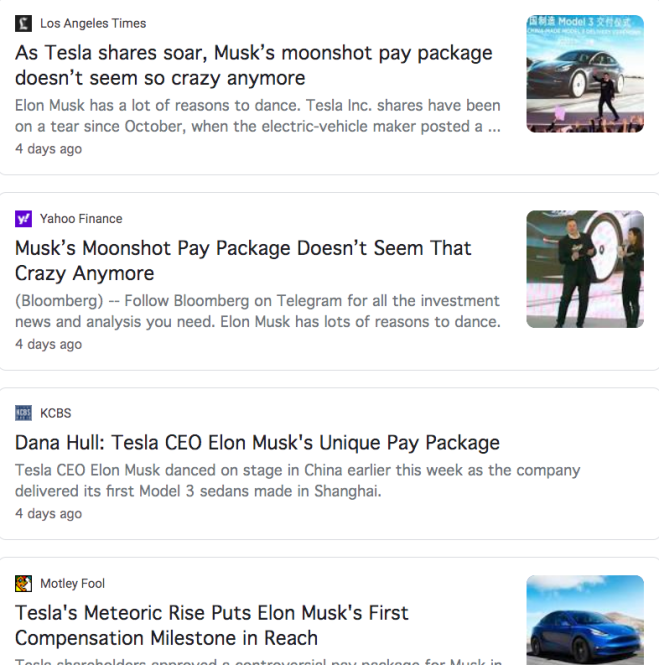 I mean, 14%, that’s like nothing to Tesla and the god-king Elon Musk. It’s a fait accompli at this point. Obviously it’s going to happen… Right? Right?! The shorts certainly seem to think so. Like any good bear, they have gone into hibernation for the winter.

$TSLA short interest has plummeted to 14.6%, a historical low. Watch out below pic.twitter.com/mTcfVUZJzm

In the end, when this is all said and done, it will be interesting to look back on this brief slice of time. Perhaps this was the moment, perhaps not. At the very least, we’ll have some interesting stories and lessons learned.

Disclosure: I am short $TSLA via put options.