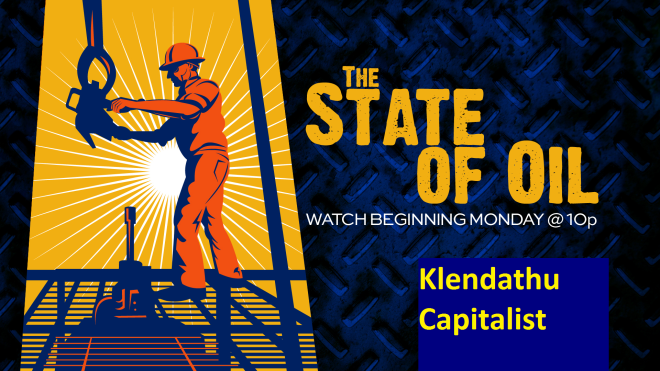 As people are being forced to learn, central banks have made markets incredibly unstable. In few places is this more clear than the oil market. The artificial demand that their free money policies created, led to an equally artificial rise in oil prices. The high oil prices created an environment for higher priced oil projects to come online. Throw in artificially low interest rates which incentivized leverage and debt and you start to realize how a 20% drop in the price of oil can cause it to drop another 50%.

As of writing, the price of oil is trading in the mid 30’s. I remember back when oil crashed to $55. The market and its participants reaction were in pure and utter disbelief. The little caveman in their heads told them this move was unnatural, and it was, just not for the reasons they thought. After all, a major commodity such as oil shouldn’t drop 50% in six months…

But it did, so everyone and their aunt was trying to pick the bottom.  Oil traders bought oil and stored it on ships out in the ocean, or piled up crude on shore in the hope that the price would rebound. But that never happened. It’s been 16 months now since oil peaked in 2014, and most anyone who bought oil to sell at a future date has lost considerable amounts of money. As time goes on, storage costs increase as storage space declines. In short, the traders created an artificial front load in demand, and an artificial backload in supply. At some point this oil will have to come back to market, and with double the number of oil tankers waiting at sea from the beginning of the year, it will have considerable downward pressure on the price.

It’s not just oil traders that have been storing vast quantities of oil. Countries around the world are filling up their tanks to the brim. The US crude storage is at a record high 490 million barrels. According to OPEC, crude oil stockpiles in OECD countries currently exceed the running five-year average by 210 million barrels. To put it mildly, the world is pumping out more oil than is being consumed. The price will continue to fall until this trend is reversed.

It is pretty obvious that, this is a supply side issue. Demand didn’t fall off over night. No, supply has been steadily increasing. Especially since the price of oil started to fall, countries and companies have been forced to pump out even more oil to maintain revenues with even more production. Which is why we see in the face of decade low oil prices that production has increased. Russia, Saudi Arabia, and the United States have all reached multi decade highs in oil production in 2015. 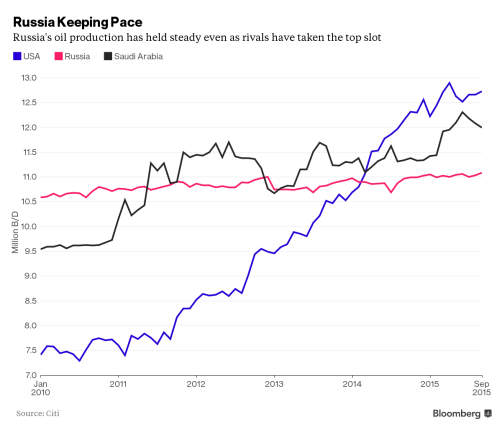 Perhaps one of the most interesting domino effects due to low oil prices is the surprising ingenuity of producers. Even if at unprofitable levels in the long term, in the short term if the well is tapped, and the oil is gushing, there’s no point in stopping. Break even prices for a tapped well are still much lower than the current $36 dollar per barrel at the time of this article. But that’s not all. US shale companies have drastically been able to reduce costs. In the early days of the shale boom the break even price for shale was thought to be around $80, now the breakeven price is much lower, in the 50s or even lower. The point is that US Shale is dying a lot slower than certain invested parties thought.

But it’s not just the Americans that are thriving under the pressure of low oil prices. Armed with new technology, Russian companies are effectively finding and extracting oil from old Soviet wells. As a matter of fact, in 2015,  Russia recorded its highest oil production since the fall of the Soviet Union. Another boon to Russian oil, is the fall in the ruble’s price against the dollar. Since most of Russia’s oil operations are priced in rubles, Russia’s cost of extraction has fallen tremendously over the past few years.

Saudi Arabia doesn’t have the fortune of a weak currency that Russia does. And there’s a good reason for that. Saudi Arabia is a desert kingdom. Nothing grows there. There’s no mining sector. There’s no agriculture. They used to grow vast quantities of wheat at a very high cost, but that has been slowly phased out. There’s nothing but oil sand and religion. They have a very young and undereducated population. The fact that the kingdom needs 6 million foreigners to pump their oil is not a good sign either.  The point is, that Saudi Arabia produces nothing but oil which it’s own citizens aren’t even capable of doing. Saudi Arabia’s life blood, is the wealth it receives for its oil and nothing else. Thus the country must important almost everything it needs to survive and or thrive.

If the currency falls, import prices rise, which is essentially the price of everything Saudi Arabia needs, the result of which is rising inflation. Faced with rising inflation, a weakening currency, falling revenues, and declining wealth, how do you think Saudi Arabia’s young, uneducated and highly religious population will respond? Which leads me to believe that the very last thing the Kingdom will do is unpeg the Riyal. I’m not saying it can’t happen, I still think it could, but if you look at the effects a currency devaluation will have on the Saudi Arabian social order, it doesn’t seem likely in the short term. Saudi Arabia would have to be in dire straights to be forced to unpeg it’s currency. And although it is headed in that direction, it would take a few years of significant FX reserve drain or a few very important factors that would have to occur that would make the peg unsustainable.

What are those factors? First and most importantly, is the forex reserves. This is their ammunition to defend the peg. As long as the reserves don’t dwindle too quickly, Saudi Arabia should be able to defend the peg. But as you can see the currency reserves have fallen off a cliff in 2015. After peaking at roughly $740B in 2014, forex reserves have fallen to $633B as of december 2015. The government posted a budget deficit of 15% for 2015. At this rate, with all things being equal, in 5 years, the country won’t have enough FX reserves to defend the peg. So we have our ticking, but must keep in mid, all things won’t be equal. Obviously the price of oil will change, but so too will the Saudi Government Budget. Steps have already been taken to reduce the deficit dramatically. The Saudi Government has reduced a wide range of subsidies for its citizens, as well as reigned in some spending. But not on weapons, because the Kingdom is busy fighting a few wars at the moment and needs to be prepared. With all that said and done, the Saudi Arabian government still projects it will run a deficit of 13% of GDP. Of course, this is under the assumption that the price of oil for 2016 will be $50.

Given the current market dynamics: increased production from Iran,  Iraq’s 25% increase in production over the course of 2015, record amounts of oil in storage, major countries producing record amounts of oil, the fed tightening monetary policy and US shale companies being unwilling or unable to shut off their wells at a fast enough to pace to make way for new and cheaper production, the price of oil looks to be headed in only one direction, down. That’s not to say we will see a spike or two back up to the 40s, but they will be temporary till more production comes off line.

But the only place we could see a significant drop in production would be US shale. The EIA predicts that US production will lead to a paltry 500,000 bpd drop in production. This is not of significant magnitude to cause a rally in the price of oil. There’s just too much supply coming to market within the next year and not enough unsustainable production falling off. Despite a lot of the current supply being unsustainable in the long term, the short term should continue to get ugly. However, if oil drops into the 20s, which I believe short term is where its headed, then we could see a much larger drop in production from the US shale than the EIA is predicting. I doubt any US shale is sustainable in the 20s and we should see quite a few companies go the way of the dodo. Once again, it appears that the EIA like the Saudi Arabian Government is forecasting an optimistic oil price. Which leads me to believe that oil falling into the 20s could have enormous psychological effects on the market. Which could lead to extremely imbalanced positions in the currency markets.

To make matters EVEN WORSE, the Federal Reserve, in all its wisdom, has decided to raise interest rates!  At a time when the oil nations of the world are drowning in oil, here comes Janet Yellen stomping her steel toed boot on their heads! If the dollar strengthens, the price of oil in dollars will fall even further. But oil isn’t the only thing priced in dollars, so is the Riyal. After all it’s pegged to the dollar. And if it is to stay pegged, the Saudis will have to spend a lot more money to keep it that way!

The bottom line, is that oil is most likely headed even lower for the near term and will stay low for the remainder of the year. However, this goes against the forecasts of various governments and the markets. If I am right, the global economy will not be prepared for the dramatic events and knock on effects that even lower oil prices will have, whether that be excessive bankruptcies in US shale, falling inflation in across India, Japan, South Korea, China and Southeast Asia, or broken currency pegs. The point is, with these oil prices something will break, it’s a matter of time.