The story of the Japanese Yen will go down in the annals of central planning history. Imagine if the US housing authorities noticed there was a housing bubble forming in 1990 and they absolutely did everything they could to stop people from buying houses, but in spite of their best efforts the bubble grew and grew for over 25 years.

I know. I know. It sounds absolutely ridiculous that the US wouldn’t have the capacity to prevent a bubble in US real estate even if it knew and actively worked to solve the problem, and yet that’s EXACTLY what I’m ask you to picture – an institution powerless to stop a massive financial bubble.

There is a massive bubble in the Japanese Yen and only the BOJ seems to know it. Not only does the BOJ know it, but it has been actively warning people to sell it, and yet people keep buying. Much to the central bank’s chagrin, the damn thing keeps rising.

So the BOJ prints some currency, showing just how easy it is to obtain and thereby proving its true worth. But that’s not enough, the currency continues to appreciate. The BOJ is forced to up its game and starts purchasing bonds with the newly printed money. But when even that wasn’t enough, they bought equities, but the currency still rose.

Nothing works. It didn’t matter what the BOJ did with the currency, people wouldn’t stop buying it. Almost all hope was lost. But then something happened. A change in the winds, a turning of the tide at the most opportune time…

For the first time in over 25 years, a member of the BOJ uttered the Greek word synonymous with invention-

The BOJ finally discovered where the Yen’s true value lied. Not in the physical paper, nor the imaginary numbers on the computer screen, no the true value rest at the heart of the BOJ.

Manipulating one point on the yield curve is nigh impossible, the members of the BOJ thought they would look insane if they tried to manipulate more points on the curve. And that is exactly what they did. “Yield curve control” was never meant to boost lending in the Japanese economy but destroy faith in the institution that controls the yen.

"This is our world in 2016: A central bank needs credibility so it can damage its credibility." https://t.co/3Bkai86kBq

OK. I’m only mildly joking. I don’t actually believe the BOJ specifically instituted “yield curve control” to purposefully destroy their credibility… although that may be exactly what it looks like, it is not. They have hearts of gold over there at the BOJ.

In all seriousness I’m trying to give a very important point here. The Yen is in a bubble, and not only can it go much higher from here but the only thing capable of bringing this beast down is investor psychology. How to determine the psychological breaking points are almost impossible ahead of time. Instead we must rely on charts and sentiment.

CNYJPY bouncing off its 38.2% retracement level off the 2012-2015 move. Notice the breaking of the downward trend-line in RSI. 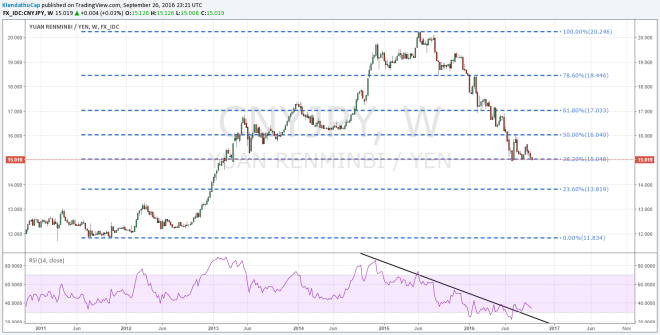 Note the possible break above 12 month trend line resistance with a positive. With momentum POSSIBLY diverging at the same time.

Unsurprisingly USDJPY behaves quite similarly, but the dollar I believe is on a pause heading higher. Stiff resistance at the 50% fib retracement level from the 2012-2015 move. Once again, note a potential break in RSI trend. Potentially just on a break before it rips lower, but it remains to be seen.

Finally short term momentum has turned positive while the USDJPY flattened. Make no mistake, the Yen is near a major tipping point. Which ever way it goes from here will most likely be as surprising at it is violent.

Lastly I turn the attention to XAUJPY, because in the end, gold is the master of all fiat currencies. On the 1 month graph, over the last few years XAUJPY has been rangebound since 2011. Most interesting is the upper range is bounded by the 161% extension of the 2000-2008 rally. Right now it’s in no danger of being broken for a 3rd time. However, another long term trend line from the early 2000’s now appears to be acting as support. Lastly, momentum in this cross also appears to be waning. It will be interesting to see which way this breaks.

Overall, the Yen’s upward momentum appears to have slowed considerably. Key technical levels have been tested this year multiple times. It will be a fun one to watch.