“No one goes there anymore, that place is too crowded.” – Yogi Berra

Did you hear that the long-term and spot prices of Uranium hit +11 year lows last month? Of course you didn’t. Unless you follow me on twitter that is. Hint, hint. Wink, wink. I’m just kidding but seriously, uranium, I’ve been talking about it so much lately the government is probably monitoring my data.

Another year gone and spot and long-term prices of #Uranium at +11 year lows. pic.twitter.com/XNSGgdHN8A

This sector has been left for dead, eaten by radioactive Chernobyl wolves, pissed on by a drunk drifter before finally being lit on fire for warmth by the very same drifter. And just in case anyone forgot why this sector has been left for dead, as of was writing this blog post, Fukushima was hit by yet another earthquake and tsunami (Yes I’ve been working on this post for that long… and yes some times you can’t kill your darlings).

According to World-nuclear.org, Uranium energy demand is set to grow by over 15% over the next 7-10 years. On the surface 15% over 7- 10 years doesn’t sound like a lot but as any resource investor knows, timing is almost everything. And in this case uneconomical prices have shuttered future production and the amount of uranium under contract is about to fall precipitously over the next 7 years both of which should amplify the impact of the relatively small 15% demand growth.

Let’s not forget that China has shown time and time again that it puts a high premium on securing resources for itself. China has acquired massive stockpiles of iron ore, copper, oil and any other resource it sees as strategically important to its interest, with its push to go green and reduce pollution you can bet that uranium is on that list. Chinese utilities will be looking to acquire uranium for their reactors under construction as well as the hundreds of GWs of reactors still in the planning stage. As utilities the world over rush to lock in lower prices, we could see a significant short squeeze. 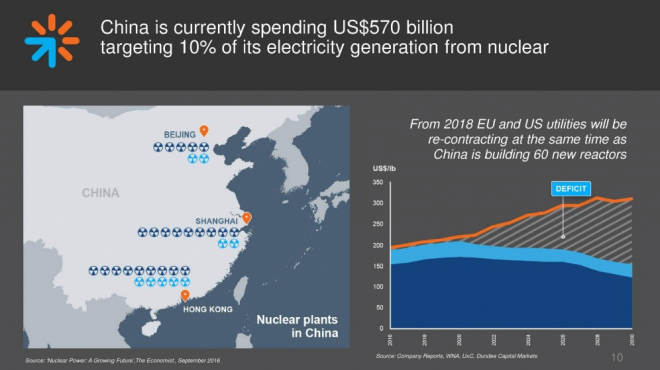 Of course that’s all been known for a few years now. It is the emergence of President Trump that may have thrown a curveball into the uranium story. Although I think the “Trumpflation” narrative is ridiculous, the spike of inflation is real. OPEC’s production cut will certainly add fuel to that rising fire. Investors are now forced albeit temporarily to consider the impact of inflation on their portfolios, which could serve as a useful catalyst for hard assets such as uranium and uranium miners.

But perhaps more importantly, Trump has shown he’s more than willing to go the extra mile to keep jobs in America.

US uranium production has fallen since the 80’s and never got back up. Since Fukushima, US mines have been hit particularly hard and have been forced to shutter production entirely. But those mines are still ready and permitted to go if the price is right, or if a certain person in power offers the utility companies a deal they can’t refuse.

US imports roughly 90% of its uranium. Domestic production near all time lows. That could change under president Trump. pic.twitter.com/jp8kpYTEE9

Trump wants to keep jobs in America, develop the US’ natural resources to become energy independent and above all he needs “shovel ready” projects to do it. It’s hard to imagine a better project that fits so nicely into all those overlapping Venn Diagrams. Not to mention the overall cost of uranium ore as percentage of a nuclear power plant’s total costs is about 1% so any political pushback for rising energy costs will be minimal. One can practically imagine Alan Rickman rising from the grave to say,

“You asked for miracles Donald, I give you uranium.”

As I have just shown the fundamental case for US uranium miners is quite strong. But timing a bottom in any market is incredibly difficult. The resource market is notorious for luring investors over trap doors and false bottoms. With that said, the technical set up on some of these American miners is starting to look quite interesting.

First up is Energy Fuels Inc (EFR). The share price seems to have found a bottom while lurking underneath the calm water RSI momentum has taken off.

We see a similar divergence on the weekly chart as well.

Moving on to Uranium Energy Corp (UEC), the pattern is not as clear on the daily…

… But the weekly looks quite lovely. 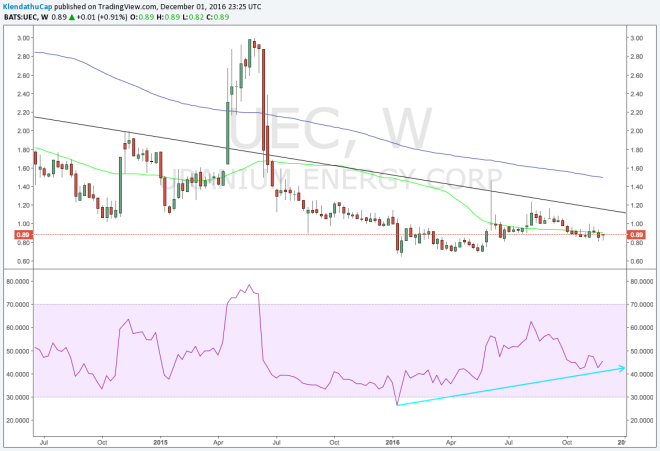 Disclaimer: I own shares in both EFR and UEC. This post is not advice to buy and or sell securities. If you act on the words of an unaccredited twenty something millennial over the internet you have only yourself to blame.