Following excerpts are from Shane Black’s The Last Boy Scout.

If you’ve ever read a Shane Black script, and a I recommend you do, especially The Last Boy Scout which was a hell of script that didn’t quite translate to the screen, you’ll notice the man’s affinity for coiled springs. The metaphor is only used twice, but the effect is devastating.

Speaking of gold (#transitions) the Yen has shared an increasingly strong correlation to gold over the last few years. Ever since and even before the BoJ officially launched its QE program in April of 2013, the yellow metal and the Yen have been highly correlated to one another. As the Yen rises so to does gold and vice versa.

Lost in this simple correlation is the fact that XAU/JPY has been locked in a trading range for the past five years.

The same chart, but in log scale. Notice the significance of the 16+ year trend line. Still broken, due to the sideways chop, but I think that will be temporary. 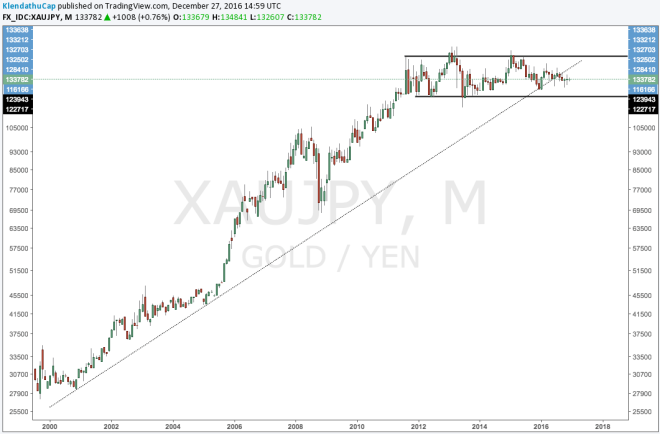 As to why I think we are about to witness a sea change in XAU/JPY cross largely stems from my opinion that developed markets are about to experience much higher inflationary pressures than expected due to Chinese stimulus and base effects from rising oil prices. The BoJ in particular has proven quite slow to react to these inflationary pressures. From my recent post, Predictions for 2017:

“It needs to be said, that by comparison, the PBoC is light years ahead of their western counter parts, the BOJ in particular. The BoJ pinned bond yields to the floor the same month that Chinese PPI had turned positive.” 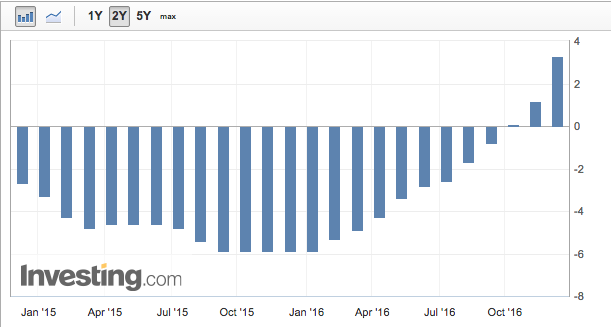 And yet despite rising oil and Chinese producer prices, these rising inflationary pressures remain hidden in the data. From Nikkei Asia Review:

Given that oil is up 40% YoY in Yen terms, I find it hard to believe that Japan CPI is still trapped in a deflationary spiral. In just another month, oil in Yen terms will be up 100% YoY. 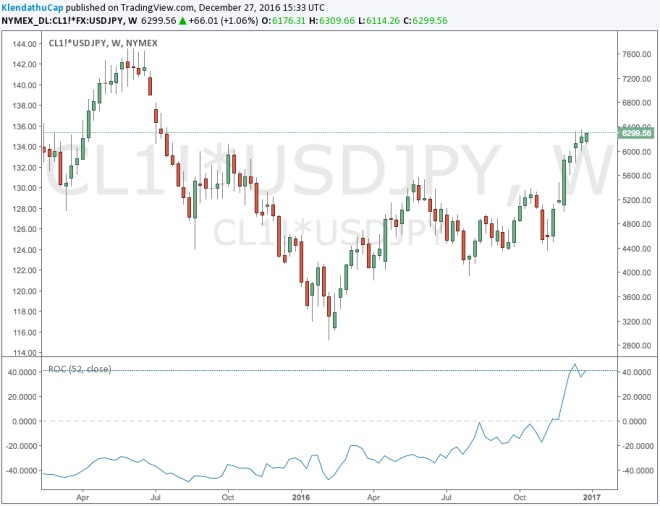 The evidence points to a significant amount of government manipulation which obscures the simple truth, inflation is rising, and bond yields SHOULD be rising as well. Due to the government of Japan’s incredibly high debt load it is clear this cannot happen. The longer the BoJ’s yield curve control policy persists in the face of these inflationary pressures the more sinister the motives behind said policy are revealed. From Nikkei Asia Review:

“Prices of cars with 1.5- to 2-liter engines have risen further, to an average of 3.19 million yen, about 50% higher than a decade ago. Prices for compacts have risen about 30%.”

If we assume the BoJ’s objective is not to bring about higher inflation, which has already arrived, but to stealthily lighten the government’s debt burden it is likely that they will tolerate much higher inflation. I argue that such policy risks destabilizing the bond market as well as the economy it supports. From Nikkei Asia Review:

The BoJ is hoping to ride the combined inflationary tailwinds of higher Chinese inflation and higher oil prices that should prop up bond yields in developed markets such as the EU and the US. As interest rate spreads between Japan and these economies widen, the Yen should continue to weaken. The weakening Yen will exacerbate the rising inflationary forces and complicate the Japanese governments job of convincing their citizens that the yellow liquid falling from the sky is actually rain.

Japan is well known for its homogeneity, and yet one wonders how long they can keep this going. Which brings me back to this idea of the coiled spring that the BoJ continues to load. At a certain point, faced with a falling currency, rising inflation, negative interest rates, the spring will unleash its pent up energy.

One thought on “XAUJPY: The Coiled Spring”