Apologies for the title, but it was worth a shot. Speaking of shots, Canada has taken quite a few recently. If you’ve been on twitter and follow Marc Cohodes you know exactly what I’m talking aboot (sorry I couldn’t resist).

Before I get to the implosion in a few of the subprime Canadian Mortgage lenders, I’m going to be very honest here: Last year, I went to the John Mauldin’s investment conference and told everyone brilliant enough to listen to a man-bunned millennial how much I hated the Canadian banks and how I was short them with low delta puts. The banks proceeded to run up another +25% on me while paying 4% dividends. Needless to say, I nailed that trade…

With that said, John Mauldin’s investment conference is rolling around again, and like clockwork I once again find myself short some of the Canadian Banks which I believe are at the nexus of a number of deflationary trends.

1. Canada’s two biggest subprime lenders, EQB and HCG (DISCLOSURE: both of which I am short) are on the verge of bankruptcy threaten the very fragile Toronto Real Estate bubble.

EQB went crashing back down the 2007 highs. Likely a matter of time before it heads much lower.

HCG which plunged 60% in a single day is speculated to be guilty of fraudulent lending and is levered 15 to 1. Against this back drop, investors have been pulling money out of the bank to the tunes of hundreds of millions of dollars per week. With the bank run in full swing, HCG has been forced to borrow at an incredibly high rate of +15%. When you take into account the fact that HCG lends at 5%, it doesn’t take much intellectual prowess to come to the conclusion that the equity is worthless.

2. More importantly, the sudden collapse of Canada’s two largest subprime lenders has sent the sector in a whirlwind. Subprime borrowing rates are set to go higher. With some mortgage brokers saying as much as 20% of their mortgages go to subprime, the impact higher subprime borrowing rates have on further demand  And despite what Canadians and Canadian bank bulls say, their housing market is loaded with hidden risks. Canada’s shadow banking sector per capita is actually 5x larger than China’s! Yes you heard that right.

From the article (my emphasis in bold):

“While BoC researchers caution there are “significant gaps” in data and knowledge, what they could find was massive. They estimated that the industry has liabilities of $1.1 trillion dollars, just a little more than half of the $2.1 trillion in liabilities Canadian banks have.“

Given the size of the shadow banking sector in Canada, it is likely that EQB and HCG are likely the tip of the iceberg of a levered financial system that has pushed real estate prices to all time highs. 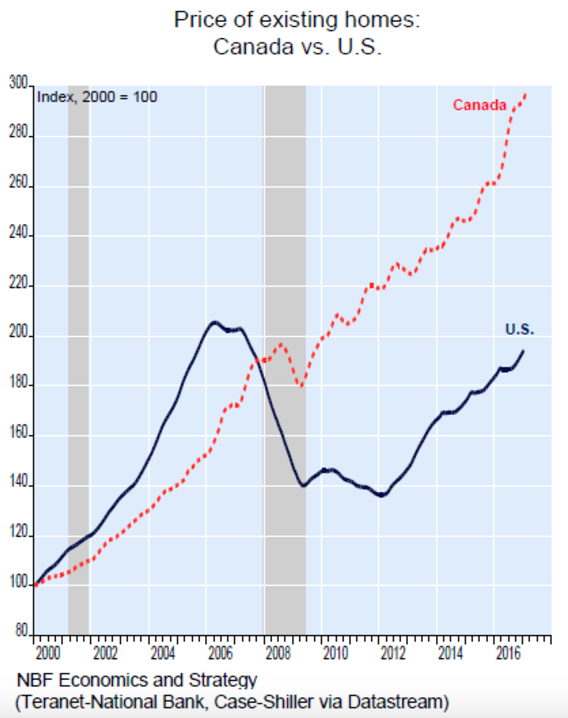 In the wake of Vancouver’s 15% foreigner’s tax which redirected all the Chinese capital flight elsewhere, we’ve witnessed Toronto’s housing market “go to plaid”.

3. With the most excellent of timing and in a bid to prevent housing prices from rising any further the government of Ontario instituted a similar 15% foreigner’s tax, which should put further downward pressure on real estate prices.

4. At the same time, Canada’s economy remains heavily exposed to the Chinese economy, which has likely peaked in Q1 of this year due to base effects.

“The National Bureau of Statistics’ official Purchasing Managers’ Index (PMI) fell to a six-month low of 51.2 in April from March’s near five-year high of 51.8.

Analysts polled by Reuters had predicted a reading of 51.6, the ninth straight month above the 50-point mark that separates growth from contraction on a monthly basis.

Demand weakened across the board with the biggest decline in the input price sub-index, which fell to 51.8, its slowest expansion since June last year, from 59.3 in March.”

Despite the headline, this slowdown was entirely predictable given the YoY base effects. China’s economy bottom in Q1 on the back of a the largest government stimulus since the 2008 financial crisis. Ever since last summer, the PBOC has been on mop up duty, attempting to de-lever and drain liquidity from the financial system.

One of Chinese speculator’s key vehicles of shadow banking risk, WMPs have seen their growth slow in the wake of this dramatic tightening. From Bloomberg:

“Outstanding products issued by banks stood at 29.1 trillion yuan ($4.2 trillion) as of March 31, up 18.6 percent from a year earlier, according to the China Banking Regulatory Commission. The growth rate slumped from 53 percent during the same period last year, CBRC said.”

In order for the credit cycle to continue, these Ponzi finance vehicles need to grow at an accelerative rate. This slowdown in credit growth is a warning sign that should be noted as China’s credit cycle approaches its Minsky moment. 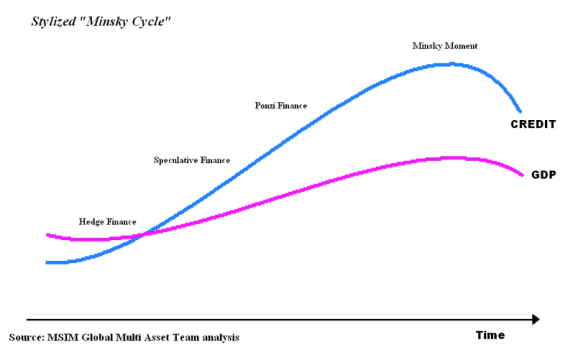 Given M1 growth in China, it is a matter of time before the PBOC turns on the liquidity taps again, which would push the US dollar higher.

It’s important to understand the impacts a slowing Chinese economy would have on future oil demand and prices, a key component of the Canadian economy. China has surpassed the US as the number one importer of oil in the world, in large part due to massive vehicle demand and an unsustainable stimulative push. As of Q1 of this year, China’s government also ended a car subsidy, leading to a dramatic slowdown in sales. From MarketWatch:

“Growth in China’s car sales slowed sharply in March, illustrating the effects of a higher sales tax on the world’s biggest car market.

Sales of vehicles, excluding those typically used for commercial purposes, grew 1.7% to 2.1 million units in March from a year earlier, the government-backed China Association of Automobile Manufacturers said Tuesday.

This marked a slowdown from the 6.3% growth in the first two months of the year. By comparison, sales grew nearly 10% in March 2016 from the previous year.”

Inventories have risen sharply as well.

In the end, despite OPEC’s best attempts to jawbone the price of oil higher, we find the price resting at a key technical level as well as its 200dma. A breakdown in oil, would put even more pressure on Canadian banks who remain highly exposed to the sector. 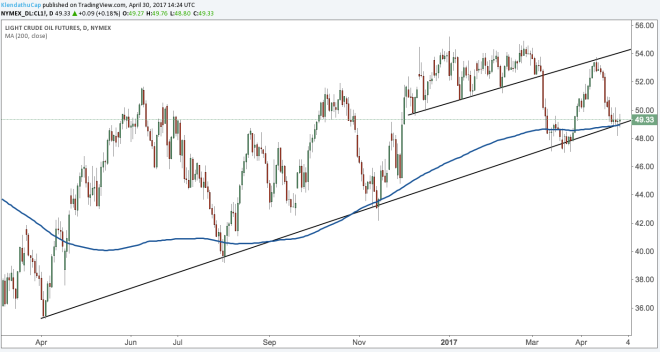 Lastly, the charts of some of these banks listed on the NYSE look very weak. (Disclosure: I am short both CM and BNS on the NYSE). CM has broken below the reflation trade trend-line as well as its 200dma. 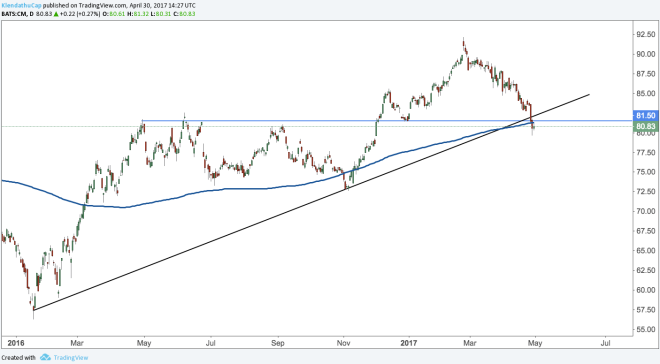 BNS chart is similar, with a familiar H&S topping pattern to boot.

Also the longer term weekly chart of BNS shows the stock failed to break at a previous resistance line.

Given these pressures on the Canadian banking system it is very likely we see a significant drop in the Loonie against the dollar. Although we should all be weary of millennial hedge fund managers bearing “obvious” trades. Cheers!

Is there a more obvious trade out there? #Seriously https://t.co/hnMsVxXOQd

$USDCAD breaking out on monthly pic.twitter.com/G6d3yDoQp9

DISCLAIMER: This blog is the diary of a twenty something millennial who has never stepped foot inside a wall street bank. He has not taken an economic or business course since high school (for which he is immensely proud of) and has been long gold since 2012 (which he is not so proud of). In short his opinions and experiences make him uniquely unqualified to give advice. This blog post is NOT advice to buy or sell securities. He may have positions in the aforementioned trades/securities. He may change his opinion the instant the post is published. In short, what follows is pure fiction based loosely in the reality of the ever shifting narrative of the markets. These posts are meant for enjoyment and self reflection and nothing else. So ENJOY and REFLECT!

Additional Disclaimer: The Author is short the NYSE listed CM and BNS as well as TSX listed EQB and HCG.