In this day and age of record low interest rates and record high asset prices it is hard enough to find a human being who is both rational and intelligent, let alone one that likes Hollywood’s sequel and reboot craze. With that said, serialized story telling when done right is incredibly rewarding as it gives us as viewers a chance to go deeper and further into the psyche of the characters we love.

Where am I going with this you might ask?

In the investment world, no one is an expert on everything. You constantly rely on the opinion of “experts” to form an opinion on a wide range of topics from China’s economic policy to the physics of lithium ion batteries.

At first glance, the major concern anyone has with an expert is are they right? In a bull market, it’s easy to look smart. Just look at all those “experts” on CNBC. What I find more important than being right, is how an expert processes new information and incorporates that into his or her opinion.

It’s this vital step, that is most often overlooked, ignored all together and what brings me to writing this very post today.

I have decided to write a sequel to my massively popular and successful summer blockbuster “Bulls On A Tightrope“. In it, I analysed a possible scenario that could negatively impact my bearish portfolio. Given that I am net short US equities and long US treasuries both of which are near all time highs, I thought now would be a great time to revisit the Bull Case.

I believe that the world economy could stabilize if the following conditions are met:

1) The Yen and Euro weaken against the dollar.

Both are interesting stories in their own right. The Euro is trading quite strong against the dollar. Is this due to dollar weakness or Euro strength? The equity on Europe’s banks trades like it needs a bailout. Yet the Euro currency does not. Is this because the market believes there will be a successful bail in without causing systemic problems?

Or is the dollar really that weak? A few years ago, the Fed loved to talk about “escape velocity”, like they were on par with the scientists and engineers that launched men and women into space. Remember that? I’m sure central bankers don’t want you to. US GDP growth for the first half of 2016 was a pathetic 1%.

The US economy is not stabilizing on the back of a weaker dollar. It’s slowing down. Now that doesn’t stop the Atlanta Fed to predict a ridiculous Q3 GDP growth rate of 3.6%.

But it seems to me that we are finally witnessing the market price in the reality that escape velocity was a fairy tale. As such, I expect the dollar to head down over the next month or two which should be positive for commodities, inflation and EM.

Any potential upside in this downward move in the dollar should be limited by the negative effects of a weaker dollar because the dollar is the quintessential tightrope that our policy makers are forced to walk. If the dollar weakens too much, Japan and Europe run into trouble. If it strengthens too much China throws a fit and sends the world some nasty deflationary pulses.

Of the three, only China has proven effective in weakening its own currency. This is where it gets interesting, because if Japan cannot weaken the Yen, the Fed may be forced to strengthen the dollar to counteract any Yen strength.

This is why Dudley talked up a September rate hike just hours after  USDJPY dipped below 100 on Monday. He bought some time, but not much. This isn’t 2012 anymore. Words are not enough to save the markets.

The possibility of a Fed rate hike going into a tumultuous US election with a slowing US economy is not something I want to be bullish on.

Throw in China’s continued slow down and it becomes incredibly difficult to be bullish on risk assets for the remainder of the year.

Stimulus in China is loosing its effectiveness at an alarming rate. M1 is exploding past M2. 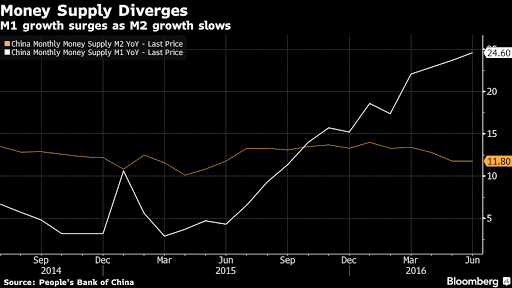 Which has put increasing pressure on China’s FX reserves.

Thanks to @_SidVerma for covering my concerns re: #China's dwindling FX reserves vs M2. https://t.co/Bnx5gwxyU4 pic.twitter.com/YqmJXuF83x

This money growth isn’t showing up in the real economy as private fixed asset investment plummets.

Which is certainly not due to a lack of available money. China’s corporate cash holdings are at record highs.

If China wants to make it to the People’s Congress next autumn, it will need a bigger stimulus package.

In essence, things look pretty grim for Japan. The domestic options for weakening the Yen in a sustained an controllable manner seem non existent right now. Without external help the Yen will continue to strengthen which will increase the stress on Japan’s fragile economic and further accelerate capital flows into Japan. 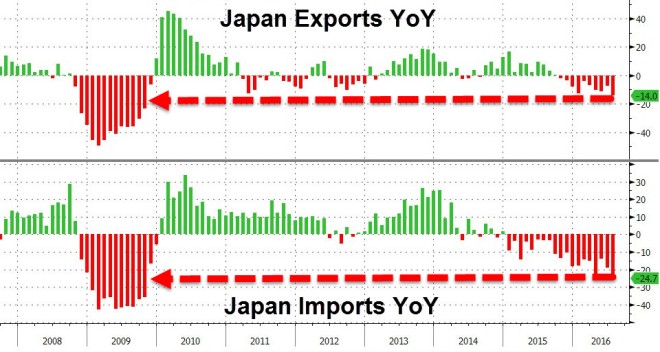 From zerohedge: “The biggest driver of the collapse of Japanese trade was a 44% crash in the Chinese trade balance.” Which brings me to an important but often overlooked cross rate – CNYJPY.

Having retraced over 60% of its 2012 up move, this trend is strong to the downside. With China forced to weaken its currency while Japan’s strengthens, I see no reason for this to change… UNLESS

The BOJ commits a major policy error. The probability of such an event is certainly on the rise. The central planners who have micromanaged their economy to a “t” are not going to sit idle as their economy implodes. They will break the market if they have to, because only then will they stop.

Negatives rates clearly haven’t had the desired effect in Japan. The Yen has considerably strengthened against the dollar since the BOJ implemented NIRP on January 29th of this year.

What if the BOJ beats the Fed to the next rate hike? No asset in the world has priced in such an event. I’m not saying they will do it, but what other options do they have? They will be compelled to try something.

Can they buy more bonds here? Not really. They are also running out of Japanese companies to buy. According to Bloomberg, the BOJ will become the top shareholder in 55 companies by the end of 2017. Fiscal stimulus was a dud. Maybe they can print yen, buy dollars and reignite the global currency war.

This is where I begin to worry about my position in US treasuries, which looks terrible from a risk reward perspective. I knowingly invested in a bubble and have now decided to exit.

Central banks are fast approaching their limits which will bring into question the logic of buying negative yielding paper. Throw in the fact that the momentum leading this bubble has started to fade. The following chart from Jesse Felder shows how over extended US treasuries are.

I’m not saying this it the low in US bond yields, but for now I don’t see a reason to own them. US treasuries have been tracking gold quite well this year. Which leads me to believe that the search for yield has been a significant contributor to the appreciation in gold.

What happens in a rate rising environment where yields rise, even if temporary. Gold from that perspective could take a hit. Gold could even fall in a rising inflationary environment (remember 2013).

The possibility of shorting bonds to hedge my gold position looks to be an interesting option. I’m not sure I’m there yet and instead would rather focus on US equity volatility or the lack there of.

S&P500 100-day rolling historical volatility since the beginning of the year…time to buy VIX options? pic.twitter.com/JGx2lRtSqR

Well this is odd. The S&P 500 broke out of a 19 month trading range that suggests a much bigger move is coming and yet volatility is incredibly low due to a record short speculative position.

At the same time investors hold a record long position in call options.

I’ve been a bear on US equities for a while now, and it’s hard to find a better time to go short than right now. From a technical, global macro, and sentiment perspective, this looks like a great opportunity to short. It’s times like now to add on.

So that’s it for now. I wandered quite a bit, but I think I covered the old bull case. Now I must find a new one to better hedge my portfolio. There certainly are interesting options as it would be nice to have a better short term inflation hedge than gold which has been behaving more like a bond. I remain intrigued by the possibility of shorting bonds, or perhaps purchasing more oil exposure as a hedge for a falling dollar which pushes up inflation.

One thought on “The Bull Case Revisited”